THIS IS WHAT YOU NEED TO KNOW ABOUT THE CREATION OF “DOWNTOWN” ETOBICOKE…. 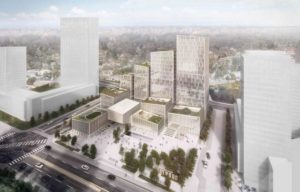 Here is the rendering for the winning submission of the new Etobicoke Civic Centre one of  two very big developments transforming the Six Point neighbourhood of Etobicoke.  This will be the focus of the new upcoming ‘downtown Etobicoke’ and I’m here to give you the inside on what’s happening now.

This central Etobicoke neighbourhood is undergoing a massive transformation, right now, and is poised to garner a lot of attention in the very near future.  Its the ‘one to watch’ and will be one of the hottest places to invest in Toronto!  My advice to you is to get in now while you can.   Reach out and ask me what is happening here and be ahead of the curve.  Many people are not aware of whats’ taking place but as the local Realtor, local resident and business owner I can share all the details you will want to know.

The Six Points Interchange intersects the major corridors of Bloor/Dundas/Kipling and a massive redevelopment project is currently underway.  A new Metrolinx Kipling Mobility hub is also being constructed which houses the Kipling TTC Station, Mississauga Transit and Go Train all under one roof.

The de-commissioning of the Six Point spaghetti junction interchange is making way for the creation of the Downtown Etobicoke hub consisting of  the new home for Etobicoke Civic Centre with significant public space, a massive new YMCA community centre) and many other yet to be announced buildings (I’ve heard library, school, grocery store, office space and condos).  The area is to become the new hub of Etobicoke.  Cloverdale Mall, a 35 acre site will also see a massive makeover with a master planned community in the works with combination of commercial, residential, low and high rise developments along with parks and significant retail space and amenities.

The surrounding area has many fantastic neighbourhood pockets with distinct homes and terrific schools, both French Immersion, advanced placement, etc.  It really is a secret paradise that’s about to become not such a secret!  Quick access to the subway, airport, downtown and 400 series highways makes this an ideal location!

Improvements in the nearby South Etobicoke neighbourhoods are well underway (Mimico, Long Branch, New Toronto) with many young families and professionals recognizing the benefits of living near the lake!  The Kingsway neighbourhood just to the east is an established, high end community with great shops and restaurants. This area of Etobicoke offers so much with homes on large treed lots and tasteful new construction homes being built, the quaint Islington Village with hand painted murals salutes the areas historic past and luxe Sherway Gardens is the local shopping mall!  Future high end developments at Humbertown Plaza, re-development of Bloor and Dundas will quickly make this a vibrant and desirable neighbourhood. 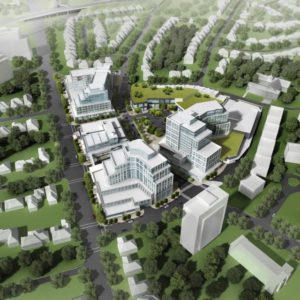 Click here for all the new developments proposed for West Toronto

I have lived in Etobicoke my entire life, work in Etobicoke, sell Etobicoke and raised my family here.   Call or email me so I can fill you in on all the exciting plans on whats happening in this soon to be ‘it’ destination in Toronto.

I’d love to hear from you!